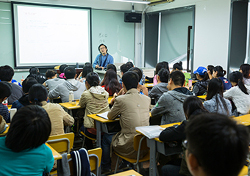 Founded in the 1950s, Beijing Film Academy (BFA) is the largest film academy in Asia and has enjoyed high prestige in the circle of film education.

The school features an excellent faculty, comprehensive disciplines, orderly teaching procedures, which provide BFA as a cradle of cultivating talents in film production, management, and theory.

A large number of top-notch film professionals have recently won international acclaims in major international film festivals. At the backdrop of film internationalization and ethnic diversification, Beijing Film Academy has attracted a large batch of overseas students from over 60 countries and regions, who devote themselves to film industry.

Chinese language courses are offered in small class teaching in the International School. Students may choose from four levels of study:

Students can choose the category suitable for their own Chinese level. BFA gives overseas students an opportunity to study film languages in Chinese, which lays a good basis for them to continue their film major courses. The university organizes various trips and sightseeing tours each year to enhance the experience of international students.

Applicants interested in the Chinese program should meet the following requirement:

This program has an IELTS English language proficiency requirement.

This is a non-degree program

Top Reasons to Study in BFA

Beijing Film Academy (BFA) is the only film academy in China and the largest film academy in Asia. Through 65 years’ development, it has built up a multidisciplinary and multi-level cultivation system that embraces the entire spectrum of film-making, including...