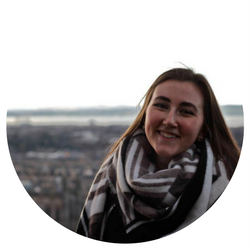 ''Edinburgh is bursting with diversity, much like any other European city. People from all corners of the world add to the unique character of Edi.''

- Tirra from the United States

Why did you choose to study abroad in Scotland?

I initially became interested in Scotland when a fellow classmate invited me to coffee to talk about his experience in Edinburgh. He talked on and on about the singularity of the city and how he was unable to recreate the feeling of walking along the cobblestone streets or short-cutting his way through Edi’s closes and winds. I was drawn in by the picture he was painting of a city bursting with both life and history.

What were the best parts of being an international student in Scotland?

Edinburgh boasts both city life and an abundance of green space. Arthur’s Seat can be scaled in less than an hour, the Pentlands offer multiple trails to trek, and there are enough pubs to satisfy anybody’s bar crawl requirements. Plus, the Scottish Highlands have some of the most diverse and breathtakingly beautiful landscapes I’ve ever seen. Besides the allure of nature, Edinburgh is bursting with diversity, much like any other European city. People from all corners of the world add to the unique character of Edi. Whether you’re a native English speaker or someone looking to improve upon your language skills, the Scottish accent will pose a worthy challenge.

What was the student life like at your university?

Want to make Scottish friends? Want to make any friends at all? Student societies are where it’s at. The Uni of Edinburgh offers 280+ special interest societies (aka clubs) for students to get involved. There are study-centric societies such as Business Society or Biomedical Society for those that want to supplement their education and there are plenty of clubs that are purely fun. I joined both the Wine Tasting Society and the Whisky Tasting Society and I met people involved in the Belly Dancing Society, Pony Trekking Society, and the Murder Mystery Society. If joining a society isn’t in the cards, it’s a sure bet that you’ll find fellow students in any of the pubs on Cowgate.

How were academics different in Scotland than the USA?

The grading scale was a strange adjustment. Instead of letters proportionate to percentage (A-F), Uni of Edinburgh uses marks (100-0) to grade assignments and exams. On top of this, the average mark appears to be much lower than in the States; an average well-written paper would receive a B (86%) back home while Scottish students were excited to pull off a mark of 68 on their essay.  Coursework also played a very different role in Scotland. Grades for each course consisted of three works: one short research essay, one large final paper, and the course exam. After being accustomed to smaller projects and homework assignments contributing to the total grade, I was initially intimidated by the idea of only three assessments making up the entire grade. Turns out it’s not as daunting as it seems!

What was the biggest challenge you faced academically?

I chose to enroll in Intro to Scottish Gaelic. I’ve always loved learning new languages so I thought that this would be a chance to understand the basics of an endangered language. Oh boy, I was in for a ride. Scottish Gaelic was unlike any language I had ever encountered: silent letter clusters, unfamiliar grammatical structure, and unique pronunciation rules. With such a small proportion of language speakers, it was nearly impossible to come across organic Gaelic conversation. I can say, without a doubt, that I have never before stared blankly at an exam page for such an extended period of time. Needless to say, I can only speak a handful of phrases to this day. (Ciamar a tha thu?)

Do you have any advice for students who may study abroad in Scotland?

Pack a raincoat and make room in your budget for plenty of pints. People always complain about the weather but it’s really quite palatable. Also, skip paying for public transportation if you’re in Edinburgh! You can walk anywhere in the city in a relatively short amount of time and you can use your pounds on more important things like kebabs and Innis & Gunn. Lastly, plan a roadtrip to the Highlands. You’ll never forgive yourself if you miss out.

Find a program in Scotland!

Studying Abroad in the UK: Chiara

Read about Chiara's experience studying abroad at Aston University in England. Chiara always knew she wanted to go abroad due to the limited options for further study in Oman. Read about her experiences studying in Birmingham, England.

Cecilia heard about the University of Edinburgh at a student fair in Italy. Learn how she decided on the university, and her perspective on what makes Scotland a rewarding study abroad locale.