The University of the Arts Helsinki (Uniarts Helsinki) offers the highest education in fine arts, music, dance and theatre in an inspiring multidisciplinary environment.

Uniarts Helsinki’s wide selection of programs in the field of arts and productive dialogue between teaching and research make the university unique on an international scale.

Uniarts Helsinki offers an inspiring and cross-disciplinary study environment and a stepping stone for future artists. We provide high-quality education that values students’ individual needs, encouraging the student to hone their craft, think independently and to push boundaries.

At the university, students have the opportunity to further their expertise in an environment where different fields of art can influence each other.

The University of the Arts Helsinki formed when the Academy of Fine Arts, the Sibelius Academy, and the Theatre Academy merged in 2013.

At Uniarts Helsinki you can study for a Bachelor’s or a Master’s degree, or a Doctorate. We offer a wide range of degree programs in music, fine arts, theatre, and dance. Many of our programs are taught in English; therefore, we welcome applications from international applicants.

Uniarts Helsinki has a scholarship program for students who are liable for payment in the form of tuition fee waivers.

If you are liable for payment, you must state on the application form if you want to apply for a scholarship from Uniarts Helsinki to cover the annual tuition fee if you are admitted as a student.

Find out more about the scholarships program on our website.

Why study at University of the Arts Helsinki 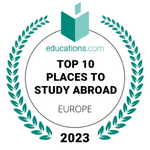 22nd best in the world in performing arts

9th in the field of performing arts

13th in the field of performing arts

The University of the Arts Student Union (ArtSU) is the community and interest organisation of all University of the Arts students. Every attending bachelor’s and master’s degree student is automatically a member of the Student Union when enrolling in the university, and exchange students and doctoral students are also welcome to join. The purpose of ArtSU is to be a tie between its members, promote the interests and rights of students and provide services that facilitate studies.

Helsinki, the capital of Finland, is rich with activities and attractions to suit everyone. It is a lively student city with around 70,000 student inhabitants. Visit the city's official website myHelsinki.fi for more information.

Uniarts Helsinki has two campuses in Helsinki – Sörnäinen and Töölö – and it also operates in Seinäjoki and Kuopio. The teaching facilities and performance venues for music are located primarily on Uniarts Helsinki’s Töölö Campus. The buildings are located in the heart of Helsinki. The Sörnäinen Campus in central Helsinki offers an inspiring learning environment especially for students of fine arts, theatre and dance.

It is very important to start processing housing applications as soon as you are accepted. We recommend the following student housing options:

Clavis is a small hall of residence for Sibelius Academy students only. Both degree students and exchange students can apply for a room in Clavis.

HOAS – the Foundation for Student Housing in the Helsinki region:

More information on student housing is available on our website.

Heart felt wish to be enrolled thank you

I think this university is the best to meet our requirements because it has verities of courses.

Show less
2/18/2022
Show all reviews for this institute Write a review!

Reviews
School rating
(5.0)
Based on 2 reviews.
Show all reviews
Write a review!