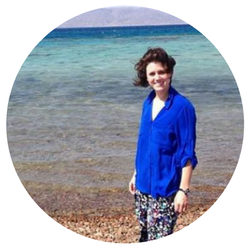 ''If you're trying to learn a language during study abroad, hang out with locals. Get out of the American student bubble. You forgo enormous gains in linguistic and cultural understanding when you stay within your comfort zone.'' - Anna from the U.S.

Why did you choose to study abroad in Jordan?

Jordan is a beautiful, diverse country with a rich history. I chose it for its relative stability in an otherwise turbulent region and was delighted to discover all it has to offer.

Based in the capital, Amman, students studying at the University of Jordan are surrounded by a wealth of ancient ruins and natural wonders of the world. The carved rock city of Petra, Greco-Roman Decapolis cities, crusader castles, awe-inspiring desert landscapes, the Dead Sea, the Red Sea--to name a few, are only a bus ride away.

For all its ancient ruins, Amman is modern and comparatively socially liberal. Most Jordanians speak at least some English and are well educated. Culture shock can be a real bear. These small things ease the stress of adapting to an environment so different than home.

If you're interested in studying Arabic, Jordan might be the only Arabic speaking country deemed safe for students. Linguistically it's a good pick. The Levantine dialect, found in Jordan, Lebanon, Palestine, and Syria, is broadly spoken and understood.

What led you to study Arabic?

I had a really wonderful anthropology professor who conducted several years of field research in Yemen. He encouraged me to pursue Arabic and directed my first independent study. It's a super useful and relevant language if you're hoping to work for the government or in international affairs. Though who knows what will happen now that President elect Trump will likely reduce American presence in the Middle East.

How has studying abroad helped you in your career?

I can't say studying Arabic has helped me directly in my career, because I'm not in a related field now. However, it did invaluably shape my perspective. Living in the Middle East exposed me to other ways of being, cured me of several naive ideas about conflict resolution, and expanded my capacity for compassion and perseverance.

What were the biggest challenges of studying in Jordan?

Hands down, the biggest challenge was coping with daily sexual harassment. There aren't social repercussions for catcalling or harassing foreigners. We had neither the vocabulary nor cultural fluency to retaliate. Certainly this is not a phenomenon particular to Jordan, but it took a toll psychologically. Probably anywhere you have a strong patriarchal culture coupled with a high level of economic disadvantage, young women should be aware that their study abroad experience will be more difficult than that of their male peers.

What are some of your favorite memories of studying in Jordan?

Some of my favorite memories were trekking wadi rum desert, floating in the Dead Sea, attending a rock concert in an ancient Roman amphitheater,  snorkeling in the Red Sea, learning to cook Jordanian food with my host mother, and attending a traditional Jordanian wedding.

What’s your best advice for students trying to learn a language during study abroad?

If you're trying to learn a language during study abroad, hang out with locals. Get out of the American student bubble. You forgo enormous gains in linguistic and cultural understanding when you stay within your comfort zone. Make a point to spend time with your host family, if you have one. Speak whenever you have an opportunity. Don't be afraid to sound stupid. This might be as close as you'll get to immersion, so make the most of it!

Ivanna, from the Dominican Republic, studied Strategic Communication at Lund University in Sweden. Read about her favorite experiences as an international student in Sweden, and how the Swedish academic system is unique.

Aspasia dreamed of leaving her home country of Greece since she was a high school student. Learn why she chose Belgium as her study abroad destination and why she thinks Belgium is an ideal European study-abroad destination.