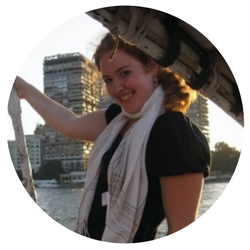 ''Not everything was easy there, but it changed me and excited me in ways which still reverberate.''

Why did you choose to study abroad in Egypt?

As I began to seriously study history and read the news in my teens, I realized the scale of complexity of cause-and-effect behind every event.  Even though Indiana, where I grew up, appears relatively isolated, living in a globalised world means that events far away still create impact.  To understand the world around me, even I needed to know what these other places looked like, smelt like, tasted like, and how these sensations affected the psyches and emotions. I was accepted to the Critical Language Scholarship Program in Egypt in 2009 to attend an intensive language school and learn about the culture. Living in Egypt, even for the summer, helped me glimpse all the other frames of references used by someone very different from me.

What was your favorite part of studying abroad in Egypt?

On evenings and weekends, the organisers of my language program took us around the city to significant historical sites and tell us their stories. Of course, these sites included the pyramids and the tombs that we associate with ancient Egypt. But as history hurtled on from Cleopatra and we visited markets and mosques and monasteries, these two thousand years of events which my American education had blithely skated over, registered deeply in my imagination. Even tired from a long day of Arabic lessons, I was excited to learn something new on these outings, or even my own evening wanders. What had been an off-stage drama of the early Coptic Christian church and its theological debates suddenly took central importance as my taxi driver rolled up his sleeves to show me the crosses tattooed on his wrist. I needed to know, and quickly, the differences between Catholic and Coptic theology.  It had never occurred to me before that there were more ways to be Christian than Catholic and Protestant.This exercise of expanding my horizon of ideas and perspectives was addictive. It made every little mundane task an adventure, as I was confronted with people and ideas without categories of understanding.  While this process has continued in every subsequent country I have lived in, Egypt was the first place to trigger it.  Not everything was easy there, but it changed me and excited me in ways which still reverberate.

What skills from studying abroad have helped you in your career?

To be honest, studying abroad in Egypt unearthed a love of travel in me which derailed my career rather than built it. Before, I had a list of options for careers which had been developed through my childhood in in the U.S. Studying abroad expanded the options and gave me tools to weigh the old ones differently.  The more I learned about myself better through travel, the more my values and goals shifted.  Where once, for example, a career in journalism or a post for the foreign service had seemed the most appealing items on the standard list presented to me at career fairs, now there were more options than I had time to consider.This isn’t to say that my time in Egypt didn’t offer me any useful skills. Originally, I thought the summer would leave me with a functional level of Arabic (it didn’t).  However, I learned a lot of soft life skills which have prepared me to live in other foreign countries: how to network amongst locals and other expats, how to find jobs, make friends, find apartments, buy groceries, go to the doctor, negotiate public transport, set up phone service, etc.  I lost my fear of both negotiating strange places and embarrassing myself with my ignorance, and without the fear, I was free to move anywhere.

Did you have any culture shock studying abroad in Egypt?

Yes.  Obviously, there was a lot of culture shock.  The differences between Egypt and the U.S. made life exciting, but sometimes, confusing and difficult.  Shopping was one of the hardest things.  I didn’t know how to make Egyptian food or cook with the local ingredients, and even if I did, I didn’t know how to go about buying the supplies. I was accustomed to shopping at large supermarkets with clearly labelled prices. It took a long time to adjust to visiting multiple locations for groceries, asking the proprietors of small shops to hand me items, and then haggling over the price.The other difficult thing was adjusting to the different gender roles in Egyptian society.  Walking around as a woman in Cairo was more difficult socially than it was at home. I was unused to the stares and catcalls and unspoken codes of behaviour around gendered spaces.  The stares I would receive unnerved and upset me, and frankly, they still would.

Would you recommend other international students to choose Egypt?

I don’t think Egypt is for everyone.  It depends on what the student is accustomed to at home, but compared to the US or northern Europe, the cultural gap is very wide. It takes someone who is willing to accept chaos in their life, and someone who understands that they will not be able to live the same life as they had at home.  They will need to accept that some things will be difficult like shopping for groceries, and some things, like commuting across the city in heavy traffic, will be stressful.  However, if the student is willing to accept differences and less predictability, then it could be a place where they can grow and learn, maybe more than they would in relatively easier places to live.What advice do you have for international students in Egypt?Research the history, and not just ancient history.  You will understand much more about both the buildings you see and the people you meet.  You will ask less offensive questions and have a greater sympathy for the complexity of modern Egypt.Also, Arabic is difficult.  If you’re going to learn the language, lower any expectation of becoming fluent immediately.

Cecilia heard about the University of Edinburgh at a student fair in Italy. Learn how she decided on the university, and her perspective on what makes Scotland a rewarding study abroad locale.

Shin Yo-Hu describes the moment she decided to leave Taiwan to study abroad, and shares her experiences studying abroad in Sweden.