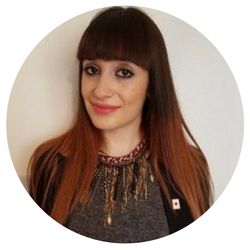 ''My study abroad experiences have transformed me into a competitive player in the marketplace.'' - Aspasia from Greece

Studying Abroad in Belgium: Stepping Outside of My Comfort Zone

Ever since I was a high school student I dreamed about my studies abroad. I used to travel a lot around the world with my family and it was something that has always fascinated me.

But the exact moment that this idea really came to light inside of me was when my cousin came back from her exchange semester in Italy and shared her experiences with me.

She showed me pictures from her trips in Paris, Barcelona and all around Italy. We spent so many hours talking about her new friends from all over the world, the mouth-watering Italian dishes and the feeling of being able to communicate with locals in their spoken language.

From that time, I was looking forward to the moment that I would enroll in university and I could finally make my dream come true. Three years later, when I commenced my Bachelor program in my hometown in Greece, I started searching for the international programs that my university offered.

I visited my university’s Department of European Educational Programmes in order to get informed about both the process and the programs that I could apply for and I ended up with deciding that I was keen on going to an exchange program in Portugal or Italy since these countries’ cultures are not a far cry from mine.

I postponed my decision to apply twice with the excuse that I did not have the time to collect the required documents. But as the time was passing, I realized that the roots of the problem were deeper than just the time constraints; I was afraid of stepping out of my comfort zone. Mostly I was afraid of communicating in another language and standing on my own feet in a new country. My parents were the ones that try to convince me to spread my wings and broaden my horizons.

So, two years later I applied with one of my classmates to go to Brussels, since was the only option that had two vacancies. And my journey had just begun. Since I am a chocoholic, Brussels was the ideal place for me; a city full of chocolates and waffles. Most importantly, Brussels is the European Capital, so there are various and affordable ways of travelling around the world. During my stay there I travelled to places both in Belgium, such as Bruges, Antwerp, Ghent and abroad, such as Paris, London and Amsterdam.

When my exchange program came to an end, I came back to Greece so to finish my studies. Then, I immediately applied for a two years Master program in Stockholm. This time I was more determined and I did not have any hesitation. I chose to study in Sweden because I hold Swedish citizenship and I found the program that I was looking for. My only worry this time was the accommodation problem that Sweden has been faced the last years and the different local language but these problems turned out to be minor in the end.

I have reaped a lot of benefits from both of my experiences abroad. Since my Bachelor's experience abroad was shorter than the Master's one, I had less time to re-adjust. But it was easier to meet new people since I used to live in a student house. As an exchange student, the university duties were less demanding in contrast to the Master’s one in which my life was filled with studying. During these years I got to know myself better and I became more independent since I have never lived alone before. Living abroad made me more open-minded and receptive because I made friends from all around the world and made me adopt a more globalized point of view.

''I got to know myself better and I became more independent''

Overall, my study abroad experiences have transformed me into a competitive player in the marketplace since nowadays companies seek candidates who are open to new challenges and experiences, can work in teams crossing cultural boundaries and can adapt easily to new workplace settings.

So if you are wondering if you should study abroad my advice is to challenge yourself. Put your best foot forward and be open-minded and who knows -  at the end you might find yourself speaking a new language!

Studying Abroad in the UK: Chiara

Read about Chiara's experience studying abroad at Aston University in England. Chiara always knew she wanted to go abroad due to the limited options for further study in Oman. Read about her experiences studying in Birmingham, England.